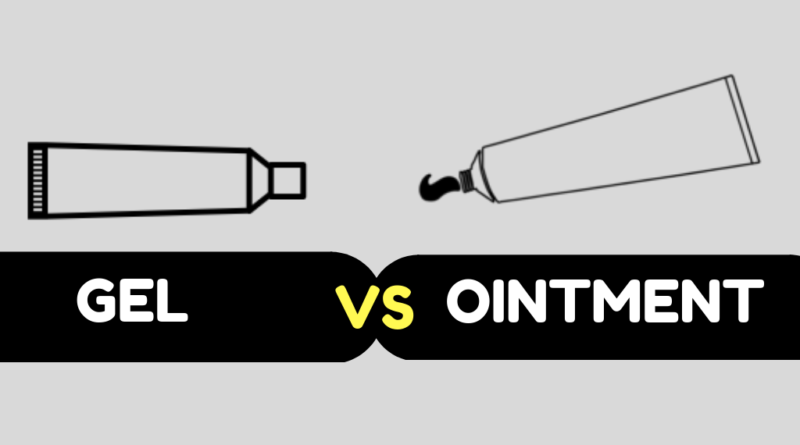 Gels are also called as Jellies some times. Gels are semisolid, transparent and non-greasy drug dosage forms mainly aimed for topical application. The Gels can be applied to the skin, used nasally, vaginally, or rectally. Gels are semisolid materials consisting of dispersion’s of small or large molecules in an aqueous base and the formulation of Gels involves the addition of several natural gums and Gelling agents (Gelling agents are used synthetic macro-molecules Gels (Jellies).

There are mainly two types of Gels, Single-Phase Gels and Two-Phase Gels. A brief description of them is given below,

HOW GELS ARE PREPARED

The preparation of Gels or Jellies is mainly done through 4 types of processes, as follows.

Ointments are mainly categorized into 2 types based on the drug content in it. they are as follows,

1. UNMEDICATED OINTMENTS
These ointments do not contain any drugs. They are useful as emollients, protectants or lubricants. Example: Petroleum jelly.

GELOINTMENTGels are transparent and Translucent semi-solid preparations in a suitable ointment base.Ointments are semi-solid preparations in which the drug is dispersed or dissolved. PROPERTIESGels are non-porous due to the presence of binding agents. Gels are non-greasy preparations.Ointments are non-porous and highly greasy and absorptive preparations. USED FORGels are used for medicating, lubricating and miscellaneous purposes.Ointments are used for emollient medicative purposes and for protection of lesions. STORED INGels are stored in well closed containers in order to prevent evaporation of water.Ointments are stored in wide mouthed containers or tubes in a cool and dry place, away from sunlight. FORMULATIONFormulation of Gels involves the usage of several natural gums and gelling agents.Formulation of ointments involves hydrocarbon, absorption, emulsifying and water soluble bases. EFFECTGels become liquid when came into contact with the skin, dry and leave a thin film of active medication.Strong emollient effect in Ointment makes it useful in dry skin conditions. APPLIED TOGels are mainly made to be applied to mucous membranes of the skin.Ointments which are more greasy are made for hairy regions like scalp, etc. FEATURESGels are good to be used on the face because ointments are mostly greasy. gels can dry things up very fast, so applying them onto the moist area would be helpful.Ointments usually stay longer on the skin than creams and gels. If a drug is applied to a place that can be easily rubbed off, then ointment is a good choice. BENEFITSGels are cosmetically acceptable and is widely used for non-medicinal activities.Ointment provides a protective film on the skin (e.g., useful in housewife’s hands, irritant dermatitis) STIFFNESSGels are stiff in nature when compared to pastes.Ointments are very stiff in nature.CONCLUSIONGels are the transparent preparations containing cellulose ether’s or carbromer in water or a water-alcohol mixture, whereas, Ointments are semi-solid preparations of hydrocarbons (petrolatum, mineral oil, paraffin’s, synthetic hydrocarbons). There are many types like Pastes, Creams, Plasters and Glycerogelatins which also derives some properties of Gels and Ointments.